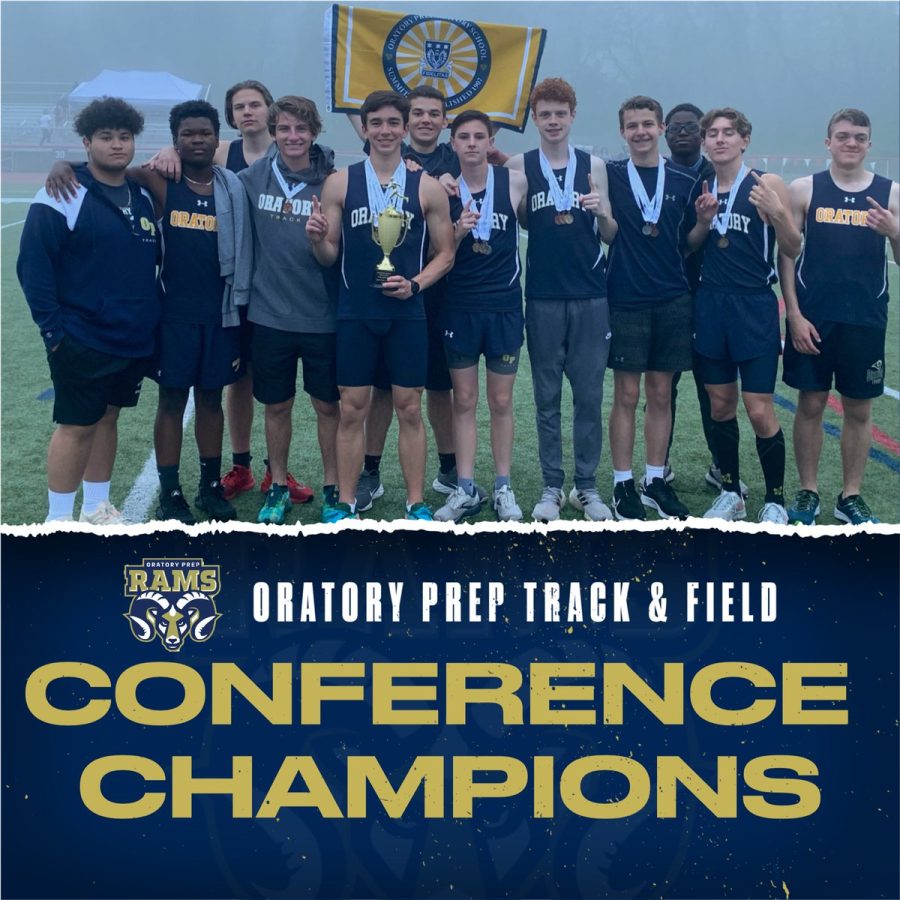 (*all images in this article are courtesy of Mr. Seebode, or @OPXC.TF on Instagram)

May 13th, Governor Livingston High School. A fog rumbles over the track – ominous of an impending 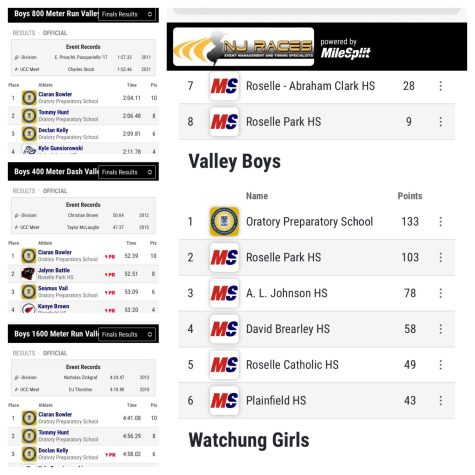 storm, but nothing like the storm the Oratory Prep Rams would bring to the track. For a quick reminder, this is how I closed out my article about the Rams on April 19th: “These performances over the course of the early season are exactly what will make your Oratory Prep Rams champions at the Union County Conference Championships on May 12th through 13th; you can Joe Namath me on that.” Almost a month later I would like to say thanks for proving me right boys – the dedication of this team is nothing short of admirable, and reflects the true spirit of an Oratory Gentleman. Now let’s get into the action.

Day 1: Thursday, May 12th – Union County Conference Championships. The Oratory Prep Rams came in on a mission to fulfill a goal they have talked about since the very first practice, to become Conference Champions. The way they would do this is by putting up the most points; in track, points are scored based on place: 1st place (10 points), 2nd place (8 points), 3rd place (6 points), 4th place (4 points), 5th place (2 points), 6th place (1 point), everyone after the top six do not score, and one team can only have three runners in each event. The opposition for points came in the form of Conference Rivals, those being Roselle Catholic, Roselle Park, David Brearley (Kenilworth), Plainfield, and Arthur L. Johnson(Clark). The scoring for the Rams was kicked off in the very first event, the 400 meter hurdles.

In this event, Junior Stephen Tuite would take third in a personal best of 1:05.50, with classmate Patrick Feit coming in fourth just 0.22 seconds behind – in a time of 1:05.72. The two would combine for 10 points, setting up the 1600 meter crew in a good position. It was in the 1600 meter that the Rams would show pure dominance, sweeping the podium with Senior Captain Ciaran Bowler coming in first, sophomore Tommy Hunt following in 2nd, and freshman Declan Kelly making his conference championship debut with a third place finish. These three runners would get a huge 24 points, and be the only 3 runners in the division to break 5 minutes in the mile long event. Although the boys struggled to put up points in the 100 meter dash, the Rams would quickly make up for it in the last event of the day, the 400 meter. Senior Ciaran Bowler would return, alongside Sophomore Seamus Vail (fresh off the 100 meter), to partake in a 400 that would be one of the most exciting races of the meet. This race was so exciting due to how, coming around the home stretch it was anyone’s race, with 4 of the 6 runners having a shot

at taking the title. However, no one was stopping Ciaran Bowler as he fought to the line to win his second event of the day, in 52.39 (personal best)- while Seamus Vail would fight to take 3rd place in a personal best of 53.09. The Rams were able to get 16 points in an event in which 1st and 4th place were separated by a mere 0.81 seconds. This was just one of the many races where the final result separated each runner by tenths of a second, but the ram’s ability to put up points in these events became crucial.

Points were not only put up on the track, as the points put up in the field events proved to be essential. Senior Aidan Murphy would come up with an enormous performance in the shot put, placing second with a throw of 41-10.75, while Freshman James Martin would also throw a personal best of 36-8 to get sixth. Aidan Murphy would continue his point scoring with a throw of 96-10 in the discus to take third. Roselle Park would dominate the triple jump, sweeping the podium – however the Oratory Jumpers would find a way to get points, with Gabe Costa placing 4th in a jump of 39-2 (seven inches off of third place), and Jake McChesney getting 5th with a jump of 36-4.50. Through these performances Oratory was able to take a 17 point lead heading into day 2, but like Kobe Bryant once said, “Job’s not finished.”

May 13th, Day 2 of the Union County Conference Championships. Many of the under-classmen missed the annual semi-formal for Day 2 of competition. Although they did not go onto the boat semi-formal was held on, this was the day that they would receive an entirely different “ship” – this one coming with a trophy. On day 2 of field events Aidan Murphy would take 6th in a throw of 107, to round out his 17 point performance. Back in the pit, Gabe Costa would jump 18-4.50 to finish his individual competition. 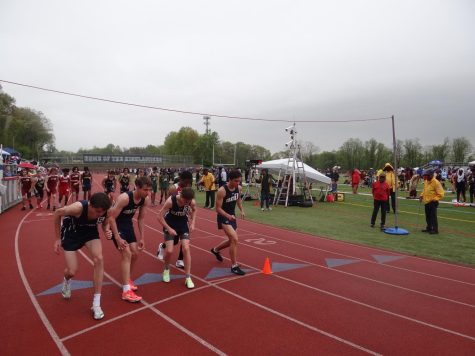 On the track, points would come in bunches. The trio of Ciaran Bowler, Tommy Hunt and Declan Kelly would once again sweep the podium, this time in the 800 meter. Ciaran Bowler would defend his title as the defending champ, running a 2:04.11 for the 2 lap race. Tommy Hunt followed just 2 seconds behind, running a personal best of 2:06.48, with Declan Kelly taking third in a personal best of 2:09.81. The distance trio put up a gargantuan 24 points, stepping up when their team needed them most. With the absence of Pat Feit, who was at his sister’s college graduation, no points were put up in the 110 hurdles, however this was more than made up for by the points put up in the 3200 meter. The trio for the 2 mile was made up of Tommy Hunt, who was the favorite by 40 seconds, second seeded Declan Kelly, who had 52 seconds over the third seed, and 5th seeded freshman Aidan Wizeman. Up front, Hunt and Kelly coasted for a 1-2 finish, but the real story was Aidan Wizeman running a personal best of 58 seconds to steal 3rd place. Hunt finally won the conference championship he desired, but Declan Kelly stepping into the 3200 meter, along with Aidan 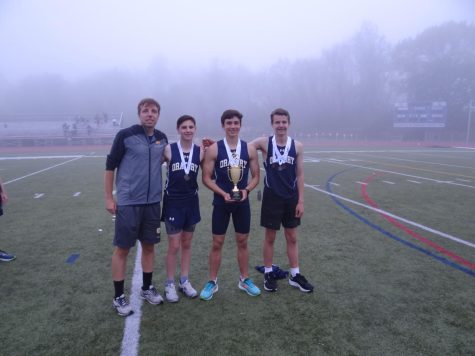 Wizeman’s performance allowed for the distance team to completely sweep every single mid-distance/distance event. This feat is a true testament to the job Coach Seebode has done, a former division 1 runner turned high caliber coach that has worked wonders for his distance squad. Hunt, Wizeman and Kelly are all looking to continue their contributions to OP athletics next cross country season, as well as continue the success on the track. At this point in the meet the rams had put up 123 points with only one event left, the 4×400 meter relay. Despite already clinching the title, the Rams were still hungry and wanted to make a statement to close out the meet. The runners who made up the 4×4 for the event would be an all star lineup: the first leg was to be run by Seamus Vail, the sophomore record holder for the 400 meter; he would hand off to the Rams top 400 meter hurdler, Stephen Tuite, who was looking to run a strong second leg. The back half of the relay was to be run by distance/mid-distance runners, with indoor 3200 meter record holder Tommy Hunt dropping down to the 400 to run the third leg, and Ciaran Bowler on the anchor, who is one of the best runners, and athletes in Oratory Prep history. Seamus Vail started off the relay with a 53.9, handing off just behind Roselle Catholic’s Samael Joseph, who had previously won the 100 meter 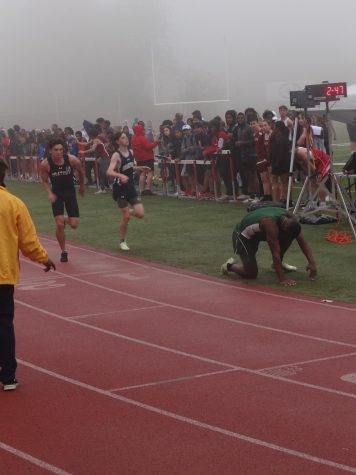 and 200 meter dash. Junior hurdler Stephen Tuite would come into the relay and hold position, while sophomore Tommy Hunt would fight through his 3rd event of the day to give Ciaran Bowler a chance. With this anchor leg by Ciaran Bowler, he forever asserted himself as a forever Oratory Legend. Not only would Bowler would go on split a 51.9 400 meter leg to make up a 50 meter gap, he would also bring OP out of second place for the first time in the relay, making the move for first with just about 120 meters to go, winning the 4×4 for his team in the process. With this victory the team would collectively run a 3:39.7, a performance that if mirrored next year would qualify for Penn Relays. Also, Bowler’s heroics would win him his 4th event of the meet. Since one athlete can only compete in 4 events, and Ciaran placed first in all 4 events, Bowler would go on to tie the record for the most points ever put up in a Union County Conference Championship, which is why he was named performer of the meet (check back later this week for an exclusive article on his performance). 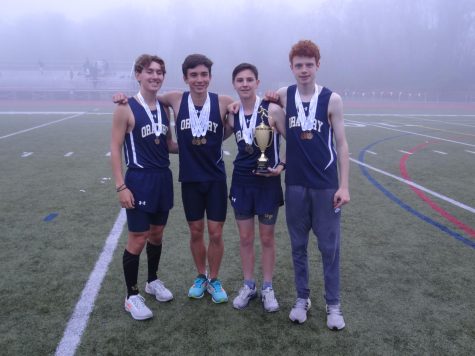 The team effort led to an Oratory Prep victory, winning the meet and putting up 133 points, Roselle Park being the closest competitor 30 points back, finishing with 103 points. The writer’s of the Oratory Omega would not be the only ones to take notice of this dominant performance, as Ryan Patti of NJ.com can be quoted from his most recent article saying, “Brearley took it’s first ever girls title and Oratory Prep coasted for the boys.” This quote is a testament to the dominance of the Rams, who may have been the best sports team at OP this year. This performance at the Conference Championship also gives OP Track and Field great momentum to the approaching county, and state meets, and is an accomplishment the team is looking to repeat next year. 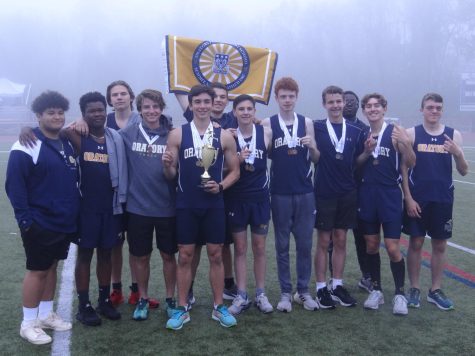 (See below for the individual box score from the meet, and points broken down by classification of event).