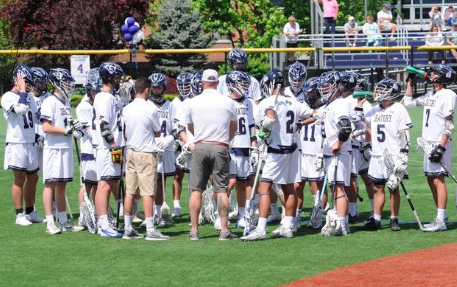 Thursday’s sideways sheets of rain caused cancellations throughout the state of all kinds, mainly outdoor sporting events. However, our Rams battled through these conditions to put the beating down on Dayton 18-5, and move to a 2-1 record for the season. Not only was the game a mess with soaking wet sticks and cleats, but included a lot of fun highlights throughout. Call him Stockton the way he dishes the ball, Matt “Tuna” Terraciano recorded an eye-opening 6 assists to go along with a lone goal. Finishing off those passes and putting them in the net were Luke Jacobello (4), Harrison Lloyd (4), Chris McNiff (3), and Andrew Nappi (3). The other goals came from Gus Russo, Kyle Gann, and Garrett Hall. Alex Parisi picks up his second win this year in net, and moves to a 3-1 career record as a starter. Freshman Andrew Nappi has been on an absolute tear after scoring his first varsity goal against St. Joe’s and since has compiled 5 goals and 2 assists in 2 games, providing a massive lift to the Rams’ midfield core. Make sure to come out to a game this year to support the Rams!