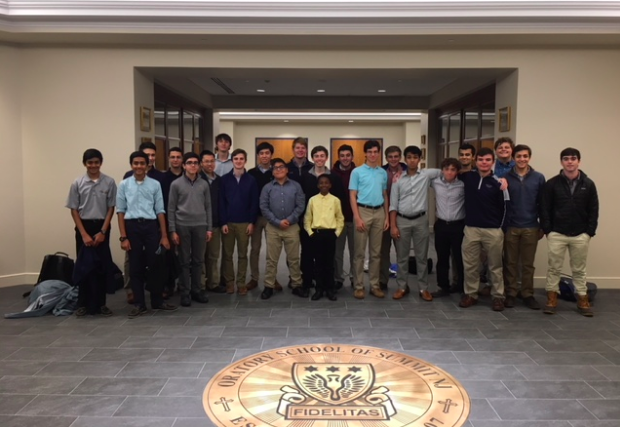 Following the most recent Model UN conferences last Thursday and Friday, three of Oratory’s very own—Trevor Woitsky, Justin Oei and Sebastian Bravo—were presented with verbal commendations and honorary delegate awards.  The event took place at Bergen Academies, where students came together from different schools around Jersey to help solve some of the most pressing issues in today’s world.  Oratory students representing Poland, Nigeria, and Japan were tasked with tackling topics ranging from Migrant Rights to Extrajudicial Killings, as mock countries attempted to collect similar and suitable beliefs; however many beliefs were contradictory as proposals often resulted in conflict.

In preparation for such an event, Oratory’s delegates undertook a long and equally arduous process. In preparation, students from ninth all the way to twelfth grade spent hours researching and learning their topics, in hopes of ingesting enough information to speak freely and knowledgeably at the conference.  By the end of the second night, some of OP’s delegates were even able to steer the discussions at their committees and set their own country above the rest.  One example of this was witnessed in Trevor Woitsky’s (mentioned above) conference, as he was able to successfully gain enough power to annex opposing countries in his committee in order to help establish a plan against world poverty without having to face a significant backlash.