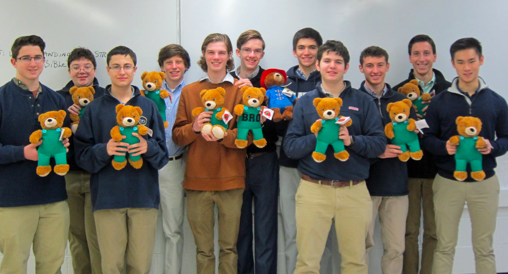 The Philip Neri Club is continuing its initiative to reach out to as many people in need as possible. In their goal, they are not forgetting to help out their OP brethren who can also use care. When an OP brother or community member gets very hurt or sick, the Philip Neri Club aims to ease the stress of their recovery by providing a package of gifts as they heal. They often contain a bear and a signed card among other items. Headed by Steven Graham, the packages have been administered to many including Ryan Sargenti who was sick for extended periods last year, Mr. Sanchez when he was recovering from a car accident, and Ryan Hochstaedter after he had surgery.

I was able to talk to Ryan about how he felt when he received the Bro-Care package, and he said, “I’d say overall the experience was very nice. I appreciated everything the Club did for me, from the cards to people asking if I was doing OK. It was really nice to know that those guys cared enough to make that whole package for me while I recovered.That whole Club is amazing and I thank them for everything.”

It is important to note that these bears which are included in the packages do not only benefit the OP brothers who are receiving the packages. These Care Bear Teddy Bears are purchased at Kohl’s who then donates 100% of the net profits to the Children’s Hospital of Philadelphia. This hospital cares for children battling illness and pushes for medical breakthroughs. The donations can help these children in every way.

On April 7th there will be a tag day to raise money for these bears. The club’s goal is to be able to use the money to purchase another 250 bears in addition to the 40 the club already has collected. In affecting a multitude of people  — from the receivers of the bears to the finding for CHOP  — these bears demonstrate a kindness and caring for those who are in need with their health.

To wrap up, I asked Steven about the impact of this initiative and its importance to him. Bears donated will be delivered to the Children’s Hospital of Philadelphia. From here, they will be distributed to both inpatients, those staying at the hospital undergoing treatment, and other children receiving treatment and testing. Steven says that “[He hopes] that the bears bring smiles to the faces of children who are going through a difficult time and potentially scary experience.” The bear is a simple gift, yet it is very impactful during the stressful times. Steven finished by talking about the impact that CHOP had on him and how he wished to give back: “The idea was originally a collaboration between Mrs. Michalski and myself which started as many different ideas and eventually culminated into this particular one. It is extremely important to me because The Children’s Hospital of Philadelphia has helped me in my personal health struggles which began last year. My physician in the Cardiac Center has been so wonderful and has helped me to manage my health. All of the doctors and nurses provide world-class and highly specialized care to some of the sickest children. I really wanted to give back and send a small gift of both hope and love to each and every child in the hospital.”